Whether it knows it or not, the current LGBT movement owes a huge debt to this hirstory created by a long legacy of people who identified as drag queens, drag kings, transvestites, cross dressers, genderqueer and those who move between and evolve their language for their gender identity and gender expression in ways that are confrontational, provocative and humor filled.

Since the early days following Stonewall LGBT organizations like the Gay Activist Alliance (GAA) and Lesbian Feminist Liberation began championing the assimilation imperative, believing that if the law -in their case the anti-discrimination bill Intro 475- said good things about gays and lesbians then they would be free. The effects of this strategy were felt most violently by the people who couldn’t or wouldn’t assimilate into the white professional gay image of these organizations. In an interview with Bob Kohler, Marsha described her experience going to one of GAA’s meetings:

I went to GAA one time and everybody turned around and looked…they weren’t friendly at all. It’s just typical. They’re not used to seeing transvestites in female attire…When they see me or Sylvia come in, they just turn around and they look hard.

The assimilation imperative became so overwhelming that trans people were kicked off the protected identities list in the anti-discrimination bill in hopes that it would pass New York City Council more quickly. As Sylvia put it in an 1992 interview with Randy Wicker on the Christopher Street Pier, Marsha P Johnson, Bubbles Rose Marie, and other street queens catalyzed the movement for gay liberation only to be violently kicked out & exiled “when drag queens were no longer needed in the movement!” This violence continues today through the historical erasure of the many contributions of Sylvia & Marsha, sex workers, homeless people, people of color and poor trans people from the riots at Stonewall.

Also, tomorrow: The New Black takes viewers into the pews, onto the streets, and provides a seat at the kitchen table as it tells the story of the historic fight to win marriage equality in Maryland, charting the evolution of this divisive issue within the black community.

The post film discussion will focus on how the Black LGBTQ community finds spiritual healing in Seattle.

Janelle is your home girl; a reflection of your fly best friend; a young woman who sets her own rules in a way few of us have seen before. That's Janelle Monae's revolution.
Posted by hannah at 10:20 PM No comments:

African-American flag, David Hammons (1990) at the school.
Posted by hannah at 7:19 PM No comments:

the unbearable whiteness of publishing

And what are the books that are being published about blacks? Joe Morton, the actor who starred in “The Brother From Another Planet,” has said that all but a few motion pictures being made about blacks are about blacks as victims. In them, we are always struggling to overcome either slavery or racism. Book publishing is little better. Black history is usually depicted as folklore about slavery, and then a fast-forward to the civil rights movement. Then I’m told that black children, and boys in particular, don’t read. Small wonder. 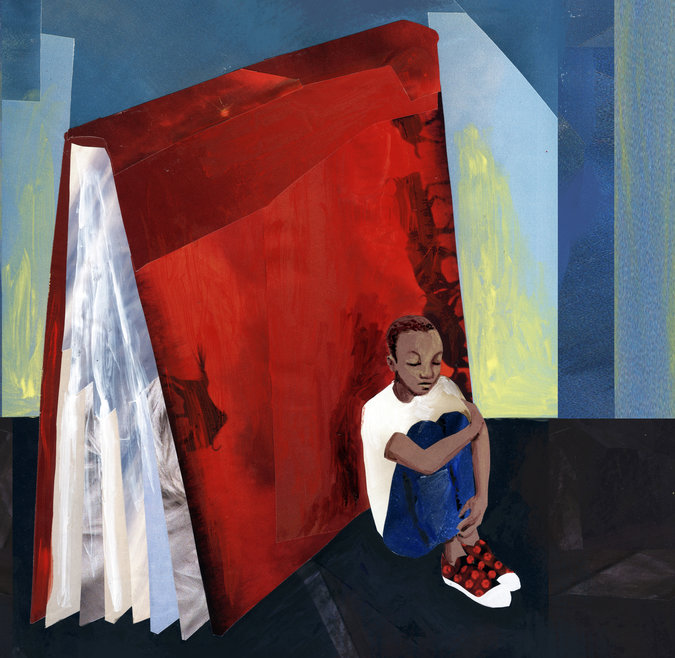 *
“And in all of those thousands of books, I’m just not in them?”

“Are there books about talking animals?”

“And superpowers? And the olden days when people dressed funny? And all the combinations of those things? Like talking animals with superpowers in magical futures ... but no me?”

Diversity in publishing has been in the news often in recent weeks. A study from a University of Wisconsin-based commission reported that just a tiny percentage of children's books last year featured non-white characters, and an essay by Pulitzer Prize winning fiction writer Junot Diaz, published in The New Yorker, attacked the "unbearable too-whiteness" of creative writing classes...

The book world has long struggled to advance from diversity panels to actual diversity, operating under a contradiction between its liberal, pluralistic ideals and the narrow range of its own population, especially in positions of power. Non-whites are absent, or close to it, on executive boards throughout, from the Association of American Publishers (AAP) to the American Booksellers Association (ABA) to the Association of Authors' Representatives (AAR). Overall, the industry has few prominent non-white publishers, editors, agents, booksellers or book critics...
"Clearly any attempt at a fix will have to confront a multitude of formidable structural challenges," Diaz said, "but that means that the structural commitment to diversity has to be equally as formidable."

On the Lack of Diversity in Publishing
Posted by hannah at 6:57 PM No comments:

On the limited impact of using the word diversity in museums

Tokenizing diversity does not very far-reaching effects on changing museum viewership...why would it?

Museums must consider ways to help visitors understand what it is that we do in fresh, engaging, practical ways. What we do is promote and preserve culture—not just a dominant white culture—but a shared culture. When communities of color do not see equal representation of cultural heritage in our exhibition schedules and programming, we send the message that museums are founded upon a dominant culture’s values. We imply that visitors of color are invited to participate and reinforce the notion that they somehow exist outside the dominant system. Moving forward I would like to advance our conversations on “diversity” by substituting “diversity” for a more inclusive term such as “fullness” or “completion” which I hope connotes an innovative manner in which the museum can elevate a more integrated vision. I would argue that “diversity” cannot merely exist to provide a diverse experience for a dominant culture. True “diversity” means that the visitor of color would need to feel that their very presence did not constitute the diversity.
Posted by hannah at 4:19 PM No comments:

Cannupa Hanska on nativeappropriations.com: "Put a crystal on it."
I especially like the feather cock and balls in the center, third image.
Posted by hannah at 4:10 PM No comments: Posted by hannah at 4:06 PM No comments:

Wilbur, 30, has documented nearly 200 tribes so far, visiting cities and remote reservations. She says Project 562 is a way for her to address inaccurate stereotypes as well as to educate people about contemporary indigenous communities. “I’ve been dreaming about the idea of changing the experience for our children,” she says. “The goal is to create an environment in our society that allows our children to be who they are, legally, socially, so that our social construct changes, so that when a non-Indian meets an Indian person, that exchange is different.” In City Arts article Tacoma Art Museum exhibit info
Note the differences in the images chosen to represent the exhibit...
Posted by hannah at 3:59 PM No comments:

Posted by hannah at 3:56 PM No comments:

Posted by hannah at 1:24 PM No comments:


"It’s almost as if people have forgotten that struggle includes struggling. You might have to lose your job. You might have to lose your life. That’s what it takes for change to happen. There’s no easy way to do this. If you’re scared to stand up for yourself, for whatever reason, all I ask is that you stop pretending...Isn’t the discomfort of oppression enough? There’s plenty of solutions, just no easy ones, but if we can shift to courage instead of cowardice, there’s more than enough solutions to guarantee our success. Guarantee. Next time you’re complaining about how this country was built on us, take a second to think about the fact that it still is. If we want to, we can shut this whole place down.

So make a decision between cowardice and courage, and if you choose courage, step it up. Step it up in any of the myriad of ways that are available to us. I’ve named a few. Name a few more."
Posted by hannah at 1:21 PM No comments:

soon to come for the incluseum!

For http://incluseum.com I will be writing a blog about making the museum world a POC friendly place.
Posted by hannah at 4:28 PM No comments: