Happy Pussy History Month/Dreams of living life like rappers do. 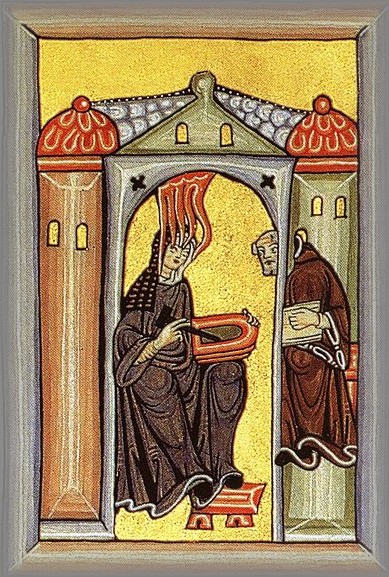 How I want that tentacled mind-spirit massage!
Keep in mind, a dose of hildegard comes with some unpleasantly self hating madonna/whore baggage. 12th century FTW!

But then her image of the universe is certainly a celebration of the vaginal..and., this may just be pregnant me, but do not those towers seem to be topped with breasts (complete with milk ducts?)

Das Weltall. Manuscript illumination from Scivias (Know the Ways) by Hildegard of Bingen (Disibodenberg: 1151). They say your hood is a pot of gold.

In Hildegard, I sense a profound interiority of mind and vision that is perhaps related to isolation and being underestimated by surrounding haters and circumstances. In particular her connection to nature and divine vibrations, a unique feminine visioning of reality, reminds me of Emily Carr, who with her arborphilia said: "Trees are so much more sensible than people, steadier and more enduring" and "I ought to stick to nature because I love trees better than people."

About this white Canadian woman Emily Carr, having lost her parents and gone to art school, in the motherland Europe, in the late 19th century, did she feel drawn to Native BC cultures and their impressive ancestral-artwork in totem poles, because she was isolated in 'proper' white-dude art circles? What prompts white, or otherwise privileged ladies (like myself) to connect with an othered experience? It could just be a visceral connection to Native respect (rather than domination of) for trees. I was listening to a historians view of why a white and native neighboring community in the pacific NW couldn't culturally jibe. It turns out it was because the whites did not understand why the natives had do much respect for trees. (Read: profit over respect?) Hm.

Some additional Emily Carr biography: "In 1913 she was obliged by financial considerations to return permanently to Victoria after a few years in Vancouver, both of which towns were, at that time, conservative artistically. Influenced by styles such as postimpressionism and Fauvism, her work was alien to those around her and remained unknown to and unrecognized by the greater art world for many years. For more than a decade she worked as a potter, dog breeder and boarding house landlady, having given up on her artistic career."

So in the sense that sometimes,  privileged isolated visionary ladies get shit done but aren't recognized for a long time by their surrounding community, so you make do amidst the misunderstandings you inevitably encounter...I get it: for now, I am like in Emily Carr's phase of giving up on art and working as a potter, dog breeder, and boarding house landlady for now. Because What else is a thug to do when you eatin' cheese from the government
Gotta provide for my daughter 'n' 'em, get the fuck up out my way, bitch

Posted by hannah at 6:19 AM No comments:

is the goal as a person of color to ascend the ivory tower in order to pee on it? and if so, how do we know that it's not surrounded by an invisible electric fence?

Posted by hannah at 5:52 AM No comments: